The Holborn is an excellent website, podcast and (soon to be) magazine all about "heritage, style and hard work". I wrote about an excellent coffee shop in Brighton for them

Email ThisBlogThis!Share to TwitterShare to FacebookShare to Pinterest
Labels: bread and milk, brighton, the holborn

A Man's Guide to Lingerie

A Man's Guide to Buying Lingerie


Chris Coleman has been portrayed as stamping his own personality and authority on the Wales national team by stripping the captaincy (captaincies are always ‘stripped’) from Aaron Ramsey. At the same time he’s told Craig Bellamy to make up his mind about playing for his country again. Wales fans may shudder at the all too familiar prospect of the national coach risking the ire of the country’s best players by issuing ultimatums. With Chris Coleman still awaiting his first victory this could easily be seen as a bold move – if not foolhardy. But that doesn’t mean that, in this case, that his move is a bad one.
The Ramsey decision will probably be seen as a bigger deal of the two. But this is where I think Coleman has got it completely right. When Ramsey first burst onto the scene as a teenager at Cardiff he was seen as many to be THE future of Welsh football. A star in the making that, unlike Wales’ traditional superstars, could actually run a game from the middle of the pitch and not be let down by the less skillfull members of the side. The British (see English) media became aware of him on a larger scale when he ran England’s midfield ragged in the U21 European Championship play-off games in 2008 – capped by a great goal at Villa Park in the second leg. 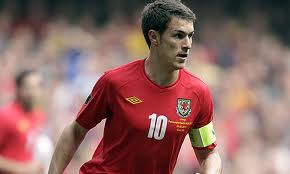 I would argue that his level of influence and skill are not at the same level now. The main reason for this, of course, is the terrible double fracture he endured playing for Arsenal against Stoke in 2010. But, as is the way with Wales, he is still looked at as a saviour - a player who can take the nation to the promised land. Brazil in 2014 to be precise. This is both incorrect and unfair to Ramsey. The pressure of captaining the side only made it worse. This is a view I’ve held for a while but was strengthened by watching him in two recent games. As part of the Great Britain Olympic side that went out of the competition at the hands of South Korea he constantly looked like he wanted much more time on the ball than he actually had and made a string of poorly conceived passes that gave away possession. The fact that he missed a penalty that would have taken Team GB undeservedly through to the semis just topped off his night.
Against Belgium in the recent World Cup qualifier in Cardiff he again took far too much time and repeatedly gave the ball away. Although Belgium were nowhere near as impressive as their team of superstars had promised, Ramsey failed to inspire a side (admittedly on the back foot after James Collins’ red card) that desperately needed their ‘star’ player to start the qualification group off on a positive note. The fact that Ramsey is unable to hide his frustration with himself when misplacing passes just goes to prove that he knows that he is not performing as well he used to.
Of course this being Wales there is no way that he should be dropped as he is still a Premiership star in a team of lesser players. But taking away the captaincy may take some pressure off of his very young shoulders and help him concentrate on his game - hopefully resulting in Ramsey rediscovering the form that made him one of the best young midfielders in Britain just four years ago.
Posted by Dan Roberts at 07:33 No comments:

I've a got a few things that I've written that would have been uploaded here if it had existed. From time to time I'll upload them in a 'classics-you-have-missed' kind of deal. Or something. Anyway, here's a short piece about Aaron Ramsey being relieved of his duties as captain of Wales.
Posted by Dan Roberts at 07:31 No comments:

Here's a few links for articles I was commissioned by Content On Demand to write for online health site Healthspan:

Are Eggshells the Answer to Alleviating Joint Pain?

Stop Knee Pain Holding You Back