Well that’s that then. While some may waste their time arguing over whether the Brazil World Cup was the best of all time or not, the football on show has been universally applauded. And most fans would feel that Germany lifting the trophy befitted the previous four weeks of football on display. 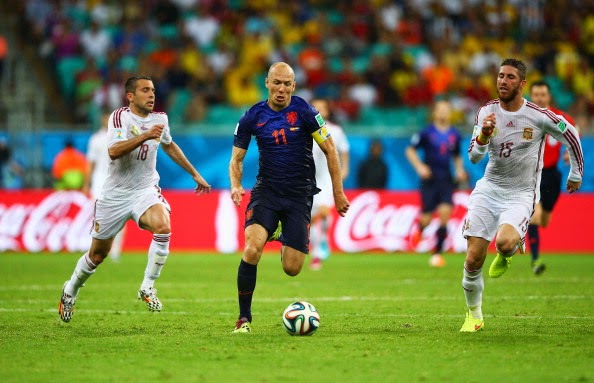 Many words have been written about the glory of the 20th World Cup but there was a moment after the Holland v Brazil match on Saturday that went largely unnoticed but made me forget for a second the money grabbing, agent-led, vacuous nature of the modern game. The third/fourth play-off match (unwanted by all but FIFA and especially by the players forced to perform one more time when they would much rather forget their semi final defeat and retreat to the luxury spas and resorts of the world) had just ended when the camera picked out Arjen Robben in the centre of the pitch. Like many players in his position he mugged for the camera taking on a triumphant pose. But it was as Robben turned away from the camera to find his teammates that a sliver of the beauty and innocence of football was fleetingly apparent. Arjen Robben is undoubtedly a great player and arguably the real player of the tournament but he is not generally thought of as a footballing innocent - as Mexican fans would confirm. But at the end of a meaningless match as the world’s attention was about to switch to crying Brazilians you could see Robben fist pump to himself – a sign that the match had meant something to him. That, in what could possibly turn out to be his final World Cup match, winning the game had meant a lot to him. His mind wasn’t on the beach, for Robben it wasn’t a perfunctory kickabout in what will turn out to be a forgotten match. Finishing third at a World Cup had meant something to him. It was an achievement. The physical and psychological barrier between the footballer and fan had come down for a split second.

No doubt as the new season goes on there will be many examples of how modern football goes against everything I hold dear about this glorious game, but for a moment my heart was lifted.