I'm now a contributor to the Stupid Americans FC site. The latest news piece is online now but here's one you may have missed 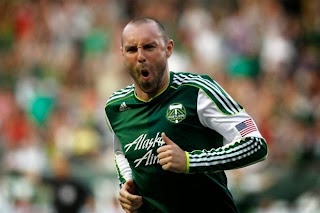 The news that Kris Boyd had make a shock return to the Scottish international set up must have had tent makers and camping supplies merchants all over Glasgow overjoyed. For it is only those fine fellows that would have the requisite material to produce shorts for the striker now plying his trade at Kilmarnock. It’s not that Boyd is a fat man – although he’s never shied away from a second helping by the look of him – it’s just that he is a big man who wears BIG shorts. Neil ‘Razor’ Ruddock…now there was a fat footballer who wore massive shorts. But Boyd seems to have decided that not an inch of flesh should be seen while he is on the pitch. Such a demure attitude to dress is not expected in the professional leagues these days so I for one applaud Boyd and his continued fight to keep the cloth makers of Scotland in business. Still doesn’t make him any good mind.
Posted by Dan Roberts at 04:43 No comments: