A Few Thoughts on Broadchurch


So it was the detective’s husband. Although most media reviews have gone big on the fact that only 29 people in the world knew the outcome, most people seemed to have a pretty good idea who the killer was before last night’s final episode of Broadchurch.

Critics have fallen over themselves to praise the ITV drama, heralding it as the British television event of the year so far. And one of the themes that nearly all reviews and previews went with was that it was Britain’s answer to The Killing and the rest of the Scandinavian crime drama wave that has proved so popular over the last few years. Now Broadchurch, and David Tennant in particular, was very good but I think the critics have got a little carried away with their praise.

There were elements of Scandi-noir in Broadchurch – especially using the setting as a character in its own right. This is something that writer Chris Chibnall has said was uppermost in his mind after moving to Dorset himself. But if anything it is unfair to compare Broadchurch to The Killing or The Bridge. The shadowy, rain sodden settings for Swedish or Danish dramas give those shows their own distinct style. Broadchurch used its small town setting as a major plot device to show that evil is not confined to the inner cities.

As much as I enjoyed Broadchurch there were a few things that made me question the uniformly gushing reviews. The red herrings weren’t really a problem – and nothing compared to the first series of The Killing – and most story lines were tied up. There was though, especially in the first few episodes, a certain amount of overacting. Pauline Quirke’s character was immediately discounted as the murderer in my household due to her ‘creepy, I’m a murderer me’ staring. And it did feel a little ‘Midsomer Murders’ as the camera lingered on the characters staring mysteriously into the distance after an encounter with any of the detectives. Apart from the lead characters the rest of the cast were nothing special and the series really didn’t need to be eight episodes long. Five or six at most would have been sufficient.

Broadchurch was good though and I did look forward to the next episode every week. It will probably do well when it comes to awards but it should be enjoyed on its own merits and not compared to superior dramas. At the end of last night’s finale we were told that Broadchurch will return. It is difficult to see how this would work. The standout performances were the two lead detectives but with David Tennant’s character medically unfit to work and Olivia Colman’s dealing with her husband’s crime it is hard to see what the premise of a second series will be.

Maybe a second series was always part of the plan but it felt like someone at ITV had seen the ratings for this series and decided that the show must go on. It would be better for ITV to continue to find gems like Broadchurch rather than ruin the show by using the name to sell inferior television.

A Few Thoughts on Cardiff's Promotion

When I was at university I used to get along to the old Ninian Park to watch Cardiff City in the old fourth division. Although some of their fans were a little 'boistorous', we always had a great time watching the likes of Nathan Blake and, after I left south Wales, I would still look out for their results. The Bluebirds did a bit better after I left and have now been promoted to the Premier League. But at what cost?

Everyone knows the story of how the fans heard rumours of a kit change/rebranding at the end of last season and then were told they were just that - rumours. And how the new Malaysian owners went ahead with the changes anyway, virtually holding the club to ransom by holding back sorely needed investment if their wishes weren't met. The bluebird on the badge was relegated to very much second fiddle to the Welsh dragon - which co-incidentally is considered good luck in the far east. Red was also seen to be much more in keeping with promoting the Cardiff brand overseas so decades of tradition were discarded in the race for cash and glory. 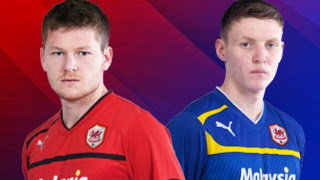 When I first heard of these changes at the start of the season I thought that Cardiff fans would never accept this. That a group of supporters calling themselves BLUEbirds would never allow their club to be rebranded in such a way. There has been some protest and a number of fans have turned their backs on the club declaring that it was not theirs anymore. A few more saw the handing out of free red scarves at a recent home match against Brighton as the last straw (an important fact to note here is that there was no mention of the word 'City' on these freebies). But, by and large, the Cardiff fans have accepted the new look.

I congratulate the team and Malky Mackay for achieving promotion, especially after season after season of coming up just short. But what I feel more than anything else is disappointment. Disappointment in the fans of Cardiff City. Years of tradition have been thrown away for a chance to scrap around for 18th place in the greatest league in the world TM. Who knows what further rebranding will take place over the summer. Cardiff Dragons? FC Cardiff Malaysia?

Maybe if Cardiff get relegated next season more fans will feel the need to question the owners over their decisions and try to take back the club they used to support. One thing is for sure though, the clock cannot be turned back. Cardiff are not the Bluebirds anymore. It is questionable whether they are even the same club.