Tonight marks the end of the international career of Craig Bellamy. He’ll collect his 78th cap in Belgium and bid nos da to 15 years of representing Wales. A lot has been said about his temper, his ego and his goal celebrations but one thing that I think can’t be argued about has been his passion for playing for his country. 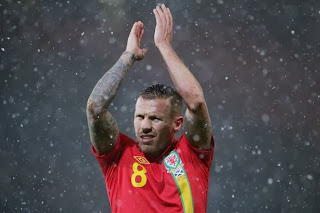 My favourite memory of Bellamy in Welsh red is jumping up and down at the back of the stand at the Millennium Stadium as he darted away from a shell-shocked Italian defence (to be honest, Manic Street Preachers playing as they trotted onto the pitch before the game had thrown them) to round Buffon and complete a, still hard to believe, 2-1 victory.

There are, of course, countless stories of arrests, fights (with fellow players and civilians alike) and bust ups with managers that have, in my opinion, unfairly soured the general consensus about one of the best players in recent Welsh history. Although not in the same class as Ryan Giggs, it is unfortunate that a player like Bellamy has not played in a Euro or World finals – and the likes of Danny Mills have. As with all big names in Welsh football he has sometimes been accused of ‘missing’ games but Bellamy has had his injuries over the years and I don’t think you could accuse him of not caring.

Bellamy has always believed he is the greatest player in the world and however misguided that is he has always given 100% and expected his teammates to do the same. Retiring from the international game should add a couple of years to his career and also means he doesn’t have to put up with any more qualification disappointments (as a player anyway).

So farewell Craig, hopefully this new batch of young hopefuls will use your passion as an example, fulfilling all our dreams by qualifying for a tournament. And if nothing else convinces you of the greatness of the man, remember this - he also thought Alan Shearer was a soft twat.
Posted by Dan Roberts at 03:22 No comments: