In a semi final played at a frenetic pace, France absorbed German pressure and went on to book a place in Sunday's final thanks to two goals from Antoine Griezmann. 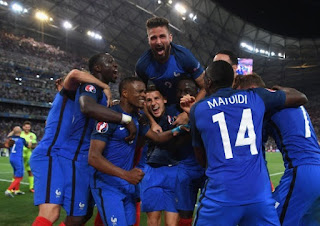 Wales and Portugal's match looked like an afternoon stroll in comparison to the blistering speed of the second semi final. France were buoyed by a passionate Marseilles crowd but soon found themselves on the back foot thanks to waves of German attacks.

But for all their pressure, Germany were not making any clear cut chances and the lack of a natural striker was clearly showing. Gomez was out injured and Thomas Mueller was still unable to find the form that we all know he possesses.

Even with all that play it was France who were closest to scoring what would have been the goal of the tournament when a slick move involving Griezmann (who else?) and the impressive Matuidi was only denied a goal by the outstretched arm of Manuel Neuer in the German goal.

Giroud also had an excellent chance to score in the first half but his quite incredible lack of pace meant that Howedes was able to get back and block the Frenchman's shot. 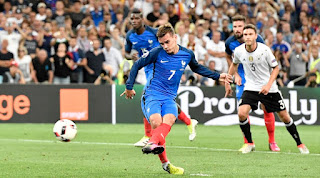 But just when it looked like we would go into the break goalless Germany gave away another stupid penalty. This time it was Schweinsteiger who led with his arm as he challenged for a header. The referee spotted the infringement and France had a wonderful chance to go 1-0 up against the run of play. Antoine Griezmann expertly dispatched the spot kick to score his fifth of the tournament and Germany were left scratching their heads at how they were losing the match.

The second half saw more pressure from Germany but they never looked like breaking down the final barrier and making all their possession pay. And with just under 20 minutes to go Griezmann scored his second of the night to send the home crowd into ecstasy. 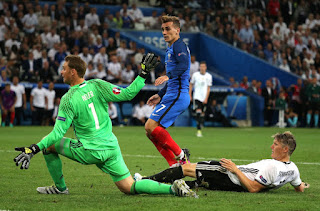 It was a mistake by Kimmich that led to the goal. Paul Pogba latched onto a mishit pass in the box and toyed with the German defender before putting an inviting cross into the middle. Neuer flapped at the ball somewhat and it was left to Griezmann to prod the ball home to sweep his nation into the final.

Germany kept on playing in their patient, attacking style but to no avail. Hugo Lloris did make an incredible save from a header close to the end but by that point the French crowd were already celebrating a famous victory that makes them favourites to win the trophy at the weekend. 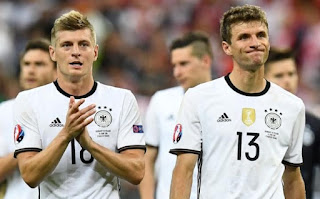