Incredible. Amazing. Outstanding. All of this and so much more. Wales defeat Belgium's golden generation to seal a semi final against Portugal. 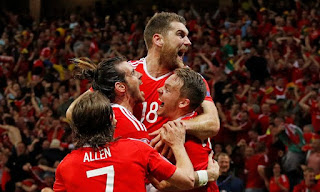 It is still sinking in. Wales have made it to the last four of a major international tournament for the first time ever. The squad's togetherness and teamwork has definitely got them where they are now but they have also shown great skill along the way.

From the start of the match Wales confounded expectations and refused to just let Belgium attack and seemed to surprise their opponents as much as everyone else with their inventive, creative play. But Eden Hazard had seemed to come good just at the right time for the Red Devils and his side were looking the more dangerous when Nainggolan struck an absolute screamer to put Belgium in the lead in the 13th minute. 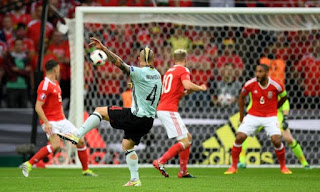 At first it looked like Wayne Hennessey should have done better with the 25 yard shot but the pace that the Belgian midfielder thundered into his strike was just too much. Wales were not deterred though and simply composed themselves and came back into the match again.

Their efforts were rewarded on the half hour mark when a well worked corner routine was finished off by captain Ashley Williams directing his free header into the corner of the net. Once again we saw the togetherness of the entire squad as Williams ran to the bench to celebrate the goal.

This was turning into the match of the tournament with both sides playing some really attractive football, completely believing that they had the skill to get through the opposing defence. Incredibly it was Wales who succeeded.

Ten minutes into the second half Gareth Bale played a perfect pass to the feet of the irrepressible Ramsey who controlled the ball before crossing in towards Robson-Kanu. The Welsh striker's exquisitely elegant turn took out the entire Belgian defence and gave him the space to put his shot past Courtois to make to 2-1 to Wales. 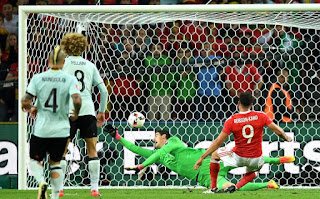 The Welsh fans were delirious. Not only had their side gone into the lead in the quarter final of the European Championship against one of the favourites to win the trophy, they had just witnessed one of the best goals ever in a major tournament.

Belgium looked stunned but pushed forward again in an attempt to force an equaliser. Fellaini had come on at half time to add some muscle in the middle of the pitch and surprisingly took a whole 14 minutes to pick up a yellow card. Although Belgium were now enjoying more of the ball, Wales didn't just sit back and Bale, Allen and Ramsey tried everything they could to add to the goal tally.

Belgium were creating chances but Fellaini missed with a close range header before Nainggolan had a penalty appeal turned down as the minutes ticked away. With Belgium pushing forward that left even more space for the Welsh wing backs to attack. And it was from Chris Gunter's cross from the right that Sam Vokes perfectly glanced header floated into the net with five minutes to go and seal the victory. 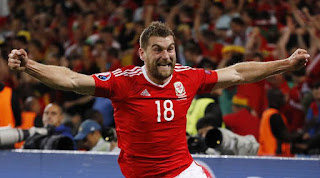 Belgium could point to their reshuffled defence as a factor in their defeat but they know that they were beaten by the better side on the day. The team work and talent at Wales' disposal - added to passion for the shirt - propelled them into the semi final. A major blow for Wales is the suspension of Ramsey and Davies for the semi as they both picked up their second yellow cards of the tournament. But even taking that into consideration, Ronaldo and co will not be too confident of a victory.

A real mouth-watering fixture later as Germany take on Italy. The Italians have confounded expectations from the start of their campaign when they beat Belgium and will take comfort in the remarkable fact that they have never lost to Germany in a tournament match. 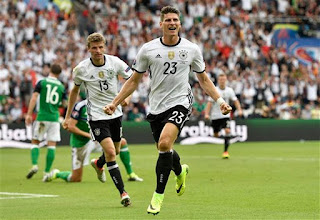 Joachim Low seems to have found his favoured starting eleven now (in between smelling various parts of his body on live television) and Gomez will be hoping he can add to his goal tally against Italy.

The Azzurri had been called the worst Italian squad ever before the tournament but now they will be full of confidence and believing that they are on the same trajectory as their 2006 World Cup winning counterparts.

Germany, without looking all-conquering, have done the job so far and I feel that this is where the Italian dream ends. I'm going for a tight German victory - possibly on penalties.
Posted by Dan Roberts at 07:32