So it was not to be. Wales failed to score for the first time in this tournament and were beaten by two goals in three minutes that take Portugal through to the final. 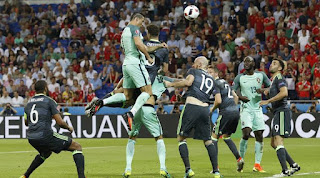 It was billed as the battle between Ronaldo and Bale but anyone who has watched both these sides would know that they are both much more than sidekicks to their respective superheroes. And with Wales and Portugal both missing key players it was always going to be a case of whose absence was felt the greatest.

Although Bale is undoubtedly the star of the Welsh side it is Aaron Ramsey that has ran the show, being able to defend and attack in equal measure and push the entire team forward. And how he was missed last night. Wales never looked as inventive or creative as they had done against Russia and Belgium, although Portugal were not offering much in return. 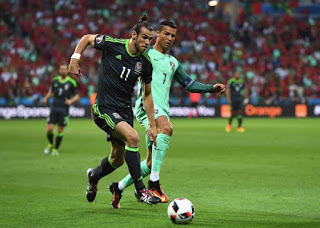 The first half was a fairly stale affair with an early showing of Ronaldo's frustration one of few highlights. Joe Allen was unable to make the incisive runs he showed in previous matches and although the Wales defence was tight, Portugal were having few problems containing Robson-Kanu or any other Welsh threat.

It was still goalless at the break but within a few minutes of the restart Portugal had taken the lead. They had come out much stronger and seemingly with real intent and it showed in the 50th minute when Ronaldo leapt highest - and longest - to fire a trademark header past Hennessey in the Welsh goal.

Wales had not really looked like scoring up until this point and Portugal put the game beyond any real doubt just three minutes later when Nani stretched out his leg to deflect a Ronaldo shot into the net to make it 2-0.

Chris Coleman did his best to refresh the side, throwing on Jonny Williams, Simon Church and Sam Vokes in a bid to get back into the game but even though there was more attacking strength there was still little to show for it. Gareth Bale attempted to take matters into his own hands with some powerful runs but his shots were easily fielded by Rui Patricio and Wales could not get the goal that would have given them the belief that they could go on and get another.

Portugal took off Sanches with a quarter of an hour still to go, possibly to give him some extra rest before the final. They will be hoping that he can provide Ronaldo with opportunities to score against either France or Germany as he is the biggest threat in the rest of the team - even at his young age. 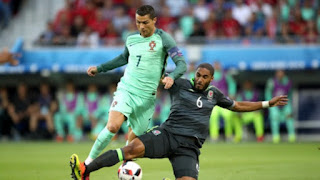 As for Wales, reaching the semi final stage in their first major tournament for nearly 60 years seems like a poor consolation this morning but the entire squad can take great heart and pride in their performances in France and now look ahead to the World Cup qualifiers that begin in September.

Wales desperately missed Aaron Ramsey and just didn't have enough to break down a Portugal side who hadn't lost a single match in the tournament. They will now go home with their heads held high while Ronaldo will have to figure out how to lead his side to the victory he yearns for against either France or Germany on Sunday.

The second semi final brings together two of the favourites in what should be a really enthralling game. Neither side has looked overly dominant up to now but the performance from France against Iceland - along with home support - could give them the confidence that they need to beat Germany.

Mario Gomez is injured so won't be playing tonight and it could be the lack of a proper striker that is Germany's downfall. Goetze looked woefully out of form - and position - in the first two group games and Joachim Low's men will have to rely on the attacking prowess of the midfield if they are to progress. Or maybe Thomas Mueller will finally click into gear and score some goals? 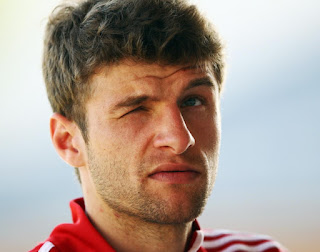 Didier Deschamps has no such selection worries with his entire squad fit and now suspension free. If this match was taking place anywhere apart from in France I would be going for a German win but I think the home side will use their advantages well tonight and make it to the final - without the need for extra time and penalties.
Posted by Dan Roberts at 02:58