So we did get to see Ronaldo tears, for a variety of different reasons in the end, as Portugal beat the host nation to win their first ever major trophy. 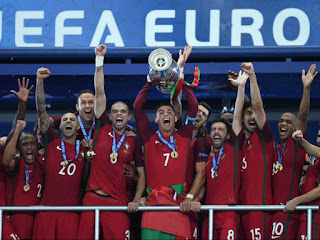 Much has been made of the fact that Portugal only won one game in regular time throughout the entire tournament but this well drilled, organised side was able to thwart the French attack last night - and push forward when necessary to win the European Championship.

With Ronaldo missing the majority of the match after being carried off on a stretcher following a collision with Dimitri Payet most observers would have given Portugal even less of a chance of victory. But they showed that their team - and squad - had more quality than just their superstar, scoring in the second half of extra time to break French hearts.

France were dominant throughout the first half and Rui Patricio made a number of saves to keep the match goalless. One from a majestic header from Griezmann showed why the Portugal keeper was probably the best shot stopper in the tournament.

France, having most of the play, did not seem to be able to work out the clear cut chances that they needed to score and even when Ronaldo exited the pitch, Portugal's regrouping denied the hosts any really good opportunities. 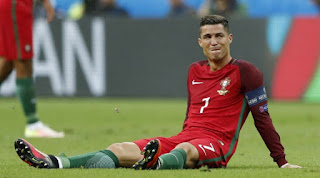 In all fairness this wasn't a classic final but there was enough happening to keep the interest of the neutral. France almost nicked it right at the end when substitute Gignac turned wonderfully in the six yard box to make space for what was a scuffed shot that beat Lloris but not the post.

Extra time it was and Portugal defied expectations by turning their game up a notch. If anything they were the attacking side in this period and nearly took the lead when the very impressive Guerreiro hit the bar with a powerful free kick with around ten minutes to go.

But just a minute later Eder picked the ball up around 30 yards out, shrugged off the challenge of Koscielny and fired an unstoppable shot to the right of Lloris in the French goal. It had looked for a while that one goal would win this final and that proved to be the case.

Ronaldo, with his leg heavily strapped, encouraged his teammates from the sidelines as the seconds ticked away and then the ref blew his whistle to give Portugal a famous victory. 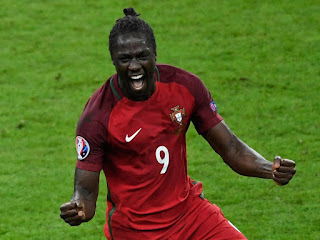 Pundits have been quick to criticise the organisation and format of the tournament - a fair point given that a third place team went on to lift the trophy - but there is nothing quite like a major international tournament and for everyone who enjoyed watching Wales, Iceland and Gabor Kiraly's tracksuit trousers this has been a memorable few weeks. Not a classic tournament but one with some definite highlights.

And if you're worrying about where you're going to get your Euro 2016-style football report fix now the tournament is over, never fear. I'm going to have a few tournament round up pieces for you in the next few days to keep you going (you lucky people!)
Posted by Dan Roberts at 03:48