The Rise of Football Collectivism

Together Stronger. That was the official hashtag and slogan of the Wales squad during the European Championship. Usually anything ‘official’ when it comes to the marketing side of football is to be ignored or avoided as the embarrassment it is, but this one hit the mark. 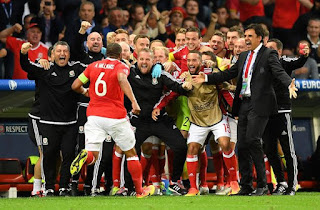 The achievements of the Welsh team have been well documented over the last few weeks but this feeling of togetherness, of unity, was something that was very noticeable among all of the successful sides in France.

Although Portugal had probably the biggest individual football superstar, it was the rest of the squad that came together as a team to take on their French opponents – and a partisan home crowd – after Ronaldo left the pitch on a stretcher after 25 minutes of Sunday’s final.

The Portugal team were actually unfairly deemed to be bit part players to Ronaldo’s headline act but they showed the unity and teamwork that was needed to win their nation’s first ever major trophy. By disregarding players such as Nani, Sanches and Pepe, pundits and fans alike helped foster the togetherness that brought them their famous victory.

But if you look at the tournament as a whole it is easy to see that those squads that worked as one were the more successful compared to other nations with perhaps a higher number of top quality players. England and Belgium are just two examples of squads brimming with some of the best players in Europe. But when they found themselves up against players playing for each other, for their coaches, and for their countries, it was the superstar sides that came up short.

Although Wales reached the semi-final in their first major tournament in 58 years it is probably Iceland that epitomise this feeling of football collectivism. In their first ever finals they compounded all expectations to, first of all, get out of a group above the eventual winners and then to go on to beat the inventors of the game themselves. England, on paper, were far too powerful for their tiny North Atlantic opponents, but as a team Iceland fought together and played to their strengths, dispatching England’s supposed superiority. 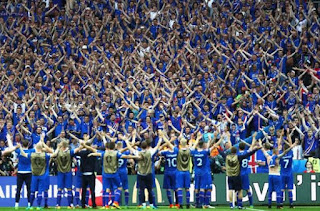 Iceland found the French side in imposing form in the quarter final and were soundly beaten. But even in that match the underdogs never gave up, kept on pushing forward when they could and won the second half of the match (unfortunately they had already conceded four in the first half).
There are a number of other examples of this togetherness from the tournament – Hungary winning their group, Albania scoring their first ever goal to win their first ever match at a finals, Northern Ireland and Slovakia qualifying for the knock out stages. All these instances give credence to the belief that teamwork can overcome individual talent.

The bloated format of the competition has been derided by many and maybe that gave some of these ‘smaller’ nations a bigger chance to work together to progress further than they would have done if only the ‘elite’ were allowed to qualify. But they still had to bring themselves together to produce these performances and results – even if some of the more storied nations were not always up to par.

In the end Ronaldo – one of the biggest superstars the sport has ever known – has won the European Championship but it was his team that won it for him. And as another tournament enters the history books the fans will remember most the exploits of Wales and Iceland as they were the teams who showed that you don’t always need the most money, or a plethora of galácticos to be successful. Sometimes you just need to play together as a team.GALGGGGjhbgjhjhjhjhjnjhn