Iceland's European Championship journey ends in a thrashing by the hosts who looked on top form even with some of their first choice starters missing through suspension.

They have made a lot of new friends (apart from Ronaldo) but Iceland are finally going home after coming up against a rampant France side in Paris. The French scored four before half time to stroll into the semi finals. 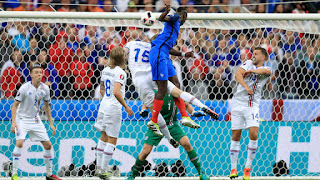 Iceland could not repeat the heroics of the England match, possibly due to tiredness, and unfortunately met a France side who were far better than their cross channel counterparts.

France started very well and looked in control, although Iceland had seemed to weather the early pressure before Giroud was allowed far too much time to control a neat through ball before shooting past the Icelandic keeper to make it 1-0 after only 12 minutes.

French poster boy Paul Pogba rose majestically for the second, heading powerfully into the net from a corner seven minutes later and it was already looking like it would be a long night for Iceland. 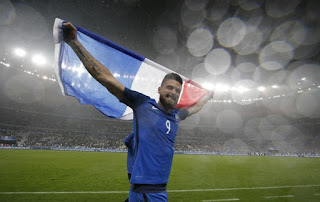 Iceland seemed to have made it to the break without any further trouble but in the space of three minutes the whole game was over. Payet worked some space for himself well before finishing with his left foot from the edge of the box to make it three before Griezmann deftly flicked the ball over the advancing keeper for the fourth on the stroke of half time.

Without wanting to sound patronising, Iceland never gave up and scored ten minutes into the second half after Sigurdsson had put in a really good low cross that Sigthorsson poked home. But any wild thoughts of a comeback were dashed a couple of minutes later when Giroud got his second of the night, leaping highest to meet a Payet free kick. 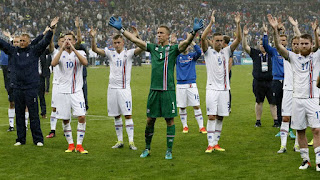 Iceland were rewarded for their continuing efforts towards the end when Bjarnason headed to make it 5-2 but the hosts were through and everyone's second favourite team were left to celebrate their remarkable tournament with their adoring fans.

France will meet Germany in what could be an outstanding semi final after they finally beat Italy on penalties on Saturday night. Ozil put the Germans 1-0 up with a sweet finish after some really good work from Gomez down the left hand side.

And it was Mario Gomez who should have made it two when his elaborate finish was well saved by Buffon in the Italian goal. If the German striker had been able to finish conventionally rather than going for a fancy flick he may have put the game beyond doubt. But Jerome Boateng's moment of madness gave Italy a penalty with just over 10 minutes ago which Bonucci slotted expertly into the corner of the net. 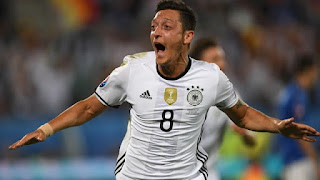 No further goals could be found in extra time so it was all down to penalties to decide who would go through to the semi final. Three penalties had already been missed - one a comical effort from Zaza for Italy - before Darmian had his effort saved. Next up was Hector who squeezed his spot kick under the arm of Buffon in the Italian goal and Germany were through.

Another nervous couple of days off now before the semis. Wales v Portugal on Wednesday and Germany v France on Thursday.